What's On in Co. Kildare

"...a witty play that deals with sexuality and morality in Ireland..." - The Abbey Theatre 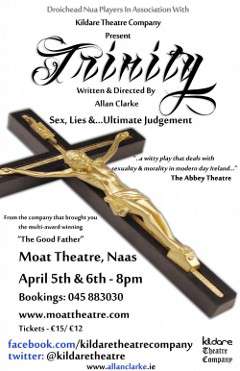 
In a world where the Catholic Church is plagued by scandal after scandal. Where the Church finds its congregation numbers rapidly dwindling. Where “Holy Wars” are fought in the name of God, Allah & oil. Are the moral guidelines set out in a 2000 year old book still as relevant in an age where science, technology and reason prevail over blind faith? Does faith in God transcend faith in the “Church”? Can they be considered separately?

Set in modern day Ireland, this thought provoking piece of theatre, finds Adam caught in a love triangle. Caught between a lover who uses him and a girlfriend who clings to him because of her own tragic past, Adam soon finds out that his antics have caught the eye of an unusual stranger. When finally confronted, Adam discovers that his actions have consequences far greater than he ever could have imagined. But who is this stranger and is he all he claims to be?

Trinity looks at the internal struggle within all men. The conflict between having what we want at any cost and doing what we feel is right. The psychological conflict between Freud's “id” & “superego”. Trinity is a play that flips the gender stereotypes and examines the current sexualised society in Ireland, juxtaposed with the religious beliefs that prevailed for hundreds of years.

Founded in 2012 by Allan Clarke & Paul Winters. Having toured together with Droichead Nua Players with the hugely successful “The Good Father” by Christian O Reilly, Allan & Paul formed Kildare Theatre Company to bring a dynamic edge to all aspects of the theatrical experience of all its productions. Their work together on “The Good Father” culminated in Allan winning Best Actor at the 2012 All Ireland Drama Finals in Shercock, Co. Cavan and Paul winning Best Lighting. “Trinity” is Kildare Theatre Company's first production.

Allan Clarke, from Kildare Town, has won every award available to an actor on the All-Ireland Drama Festival circuit. His first ever stage appearance was in Silken Thomas Player's RTE All Ireland Final winning play “The Normal Heart” by Larry Kramer in 2007. His next appearance on the festival circuit was playing Fr. Welsh in Martin Mc Donagh's (In Bruges, Seven Psychopaths) “The Lonesome West”. Despite being a supporting role, Allan won Best Actor in Enniskillen in 2009. He also won Best Supporting Actor and a Stageworks Scholarship for the role.

In 2012, for the lead role of Tim in Christian O Reilly's “The Good Father” Allan won a total of 9 awards from the 7 festivals the play competed in. Including 5 Best Actor awards, 2 Best Moment in Theatre Awards & 2 Adjudicator's Awards. Allan then went on to win Best Actor at the 2012 All Ireland Finals in Shercock, Co. Cavan. Bringing his total awards for “The Good Father” to 10. Allan strives to create unique characters in every role. His acting technique is an amalgamation of Chekhov, Stanislavski & Meisner techniques.

He also played the roles of Germanicus in Company D's “Jesus Caesar”, a leading role of Joe Donnelly in “Over The Top” and Kip in Cross Fire Theatre Company's “Wonder of the World”. He also appeared in Season 4 of “The Tudors”.

Having completed the 1st draft of "Trinity" in 2010, basing it on the short film he wrote “Just Ask Me”, which premiered at the Waterford Film Festival in 2009, Allan completed the final draft of the play in 2013.

This is Allan's directorial debut, having co-directed the hugely successful multi-award winning “The Good Father”.

Allan is also a practising psychotherapist.