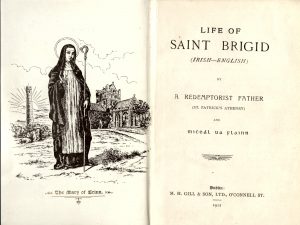 The first of February with its promise of spring also brings thoughts of hope and faith by the observances of St. Brigid’s feast day. With Patrick and Columkille she protects the land where she spent her saintly life. The reverence for St. Brigid has been maintained from the earliest times and is evident from the fact that wherever the early missionaries went through the Continent, from Cologne to Seville, churches and abbeys are to be found dedicated to her honour, while statues of St. Brigid are common even in the remotest villages of France, where the inhabitants have special devotion to Ireland’s first nun.

Kildare is, of course, St. Brigid’s county, since it was near the site of the present town of the name that the saint, retiring from the world, built her cell under an oak tree, hence Cill-dara. It was in the neighbourhood also that when she wished to found a convent for the women who resolved to follow her example, and asked the prince of the district for as much as her cloak could cover, the garment miraculously stretched itself out until it covered several acres.

Near the Church of St. Bride in Fleet St., London, was formerly a holy well dedicated to the saint and called Bride’s Well. This well gave its name to a palace erected in the neighbourhood. This was given by Edward VI to the city of London as a workhouse for the poor and a house of correction. The name thus became associated with all such places, and afterwards with the police stations to which some extent replaced them. Hence it is that the pure and holy Brigid’s name is now connected with conditions of life completely opposed to her innocence and sanctity.

In four years hence from today the Irish race will be celebrating the 14th centenary of the death of the Virgin Patroness of the Gael, the great St. Brigid. All authorities agree in naming the 1st of February 525 as the date and year of her death; and even now on the Irish-speaking fringes of the South and West, February is called the month of Brigid’s festival. The posterity of those who loved and revered her when she was still here below have ever cherished the pious belief that St. Brigid holds the second place among women in the family of heaven. “Except Mary herself,” exultingly exclaims one of her biographers, “who can compare with my Bride?” In naming her, the Irish came in time to discard the prefix “Saint,” and to address her with affectionate familiarity as “Mo-Brighid,” or, “my Bride,” “my, Brigid.”

Patroness of Many Classes

Not alone infant girls born on or near the feast St. Brigid have customarily been placed in Baptism under her special patronage, but sons of the people were, in days long gone, christened Maol-Brighide, or Giolla-Brighide, the servant of Brigid; while sons of the Church often styled themselves Brigidianus, or Calvus Brigitae, the shaveling or tonsured of Brigid. Scribes, too, appear to have had a special devotion to St. Brigid from early times, and to have trusted to her for a particular blessing upon their studious and toilsome labours. In some parts of the South of Ireland the custom is still observed  of arranging to have marriages celebrated before the 1st of February, so that the happy couple  may enter into possession of their new home on St. Brigid’s Day. This ensures the blessing of domestic peace and concord ever afterwards.

The wealth of legendary lore which has gathered around the name of St. Brigid during the ages since her death, is, perhaps greater than St. Patrick himself. One of the least known of these curious old traditions tells of a falcon that made its nest on top of the round tower of Kildare the time of St. Brigid died, and 640 years’ afterwards. Wheretofore, the people called its St. Brigid’s bird, and held it in veneration. Every year, when the breeding season came around, it would take flight to the peak of Lugduff, in Co. Wicklow; but always after the usual interval, undisturbed security among, and even within, the ecclesiastical buildings that had grown around the site of the original Church of the Oak. At the time of King John’s departure from Ireland in the 12th century this wonderful bird of the ages met its doom at the hands of a vicious spalpeen, who took its life away with one blow of his staff.

A still stranger legend, and one, too, which has certain historical data to support its authenticity, is the story of St. Brigid’s inextinguishable fire. It was not that this fire itself was incapable of being extinguished that it obtained its name; but because the nuns of Kildare had so industrially supplied fuel to feed its flames that from St. Brigid’s time  right on to the 12th century it remained perpetually burning by night and day. Throughout that long span of time an even number, consisting of 20 nuns, had remained at Kildare – never more or less. Each of those holy women in turn nightly tended the inextinguishable flame. On the twentieth night, having piled it high with wood, the last nun said: “Oh, Brigid, guard thy fire, for this night the duty devolves upon thy self.” Then she retired to her cell, and although the wood might have often been consumed before morning, yet the embers remained aglow. In the year 1200 De Loundres, the Anglo-Norman Archbishop of Dublin, ordered St, Brigid’s fire at Kildare to be extinguished, and nevermore to be kindled, “so that all occasion of superstition be removed.”

Comments on this entry are closed.