LOCAL heroes in south Kildare were honoured at a recent awards ceremony held in Athy.

The award winners were presented with handmade glass bowls produced by Lucinda Robertson of Cinders Glass in Moone, handmade leather diaries from Kilcullen company CarveOn, and handmade cards made by Mary Delaney Behan of Castlemitchell.

Although Maisie Candy couldn’t attend the night, her daughter Eilish collected the award on her behalf. The ceremony heard that when Maisie’s mother died tragically young, she never forgot how the community responded to their loss. She developed a love for the Irish language and later became a teacher and then principal at Churchtown National School. Among her invaluable contributions was promoting the Irish language, community fundraisers, a long battle to renovate and later build a new school in Churchtown, and a celebration of 100 years of Churchtown NS and 50 years of Castlemitchell Hall.

Eilish described the award as one which honoured her mother’s work and those who “toiled with her”. “It’s a wonderful honour,” she said.

John Donovan, who was there in person, was described as a strong member of the community throughout his life and one who continues to play an important role. Alongside lending his well-known tent for many occasions over the years, membership of St Laurence’s since they turned the sod, and service on numerous committees, John – now a Peace Commissioner – has organised many fundraisers for people in need. After he lost his wife Kay in 2016 he organised a memorial mile fundraiser in a bid to give back to those who supported him and raised more than €22,000 for St Brigid’s Hospice, a testament to his hard work and dedication and a reflection of the lives he has impacted.

Mr Donovan said he was accepting it for everyone in the parish of Narraghmore. “I made lots of friends far and wide,” he remarked. “People are just wonderful.”

Mary Heffernan, meanwhile, was noted as a quiet, unassuming woman who has had a massive impact on her community and is a proud Kildare woman and supporter of the Lilywhites. Having lived in Nurney all her life she’s known for her fundraising work for charities, her association with Nurney National School and her dedication to her beloved Nurney GAA Club – the ceremony heard how Mary has generated tens of thousands of euro for the club through her fundraising efforts, provides tea and refreshments at all games and events, and always has a welcoming smile for travelling players and supporters. The debt of gratitude owed to Mary by the Nurney community can’t be overstated, it was said, and her contribution and positive influence will be felt for years to come. 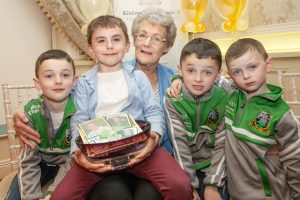 Mary’s son Will spoke on her behalf. “I can assure you she’s hugely honoured to be accepting this,” he said.

The final award was presented to Ger Kelly without whose input, it was explained, very few events are held in Athy. Described as a family man and Athy through and through, his parents Dickie and Maureen instilled decency, kindness, empathy and community activism in their children. Ger has been involved with Athy Tidy Towns since it reformed in 1998, was a founder member of Athy Pitch and Putt Club, and was part of the committee which erected a 1798 memorial in Emily Square, to name just a few contributions. Appointed a Peace Commissioner by the Minister for Justice, he also served on the last Athy Town Council and has been an integral part of Athy Town Promoters.

On receiving the award, Ger said that it wasn’t possible without the support of his wife, family and the wonderful people he has met over the years, adding that the work of he and his fellow recipients is far from over. “I am extremely honoured to receive this award,” he said.